DocumentationAPIPricingView all APIs
NB-IoT overview
What is NB-IoT?What can you do with the NB-IoT API and CloudEngine?How to subscribe to the NB-IoT API?What are the options that Proximus offers for NB-IoT?
Getting started
Downlink
Uplink
CloudEngine
API authentication

NB-IoT (Narrowband-IoT) is a narrowband radio technology based on 4G for Internet of Things (IoT) devices and applications providing improved indoor coverage and support for an important amount of low throughput devices. All this at lower power consumption and costs.

NB-IoT applications are a solution for small data volume amounts to be infrequently transmitted indoor with focus on following aspects:

More information about Proximus Narrowband-IoT is available on our corporate website.

What can you do with the NB-IoT API and CloudEngine?

The NB-IoT API allows you to send downlink messages to the NB-IoT devices. When the NB-IoT device data is send to CloudEngine then you can use the Powerful scripting capabilities, a variety of inbound and outbound endpoints and make use of the other Proximus API assets. This will allow you to create any kind of IoT application.

More information about CloudEngine is available via this link Proximus API website.

Activation of a subscription can be requested via the "pricing" tab below.

We will come back to you to complete the registration process. 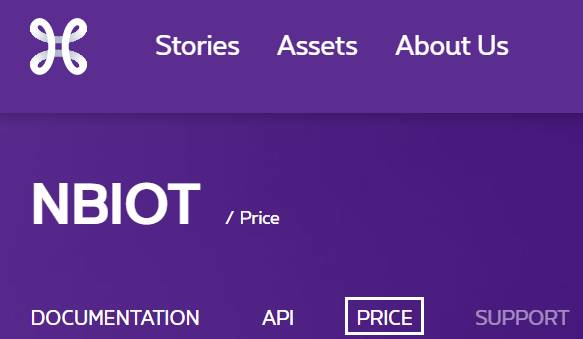 What are the options that Proximus offers for NB-IoT?

As a customer there are 3 ways to use NB-IoT.

Before setting up a NB-IoT flow, the following is needed:

When you have an account on the Proximus Machine-to-machine (M2M) platform you will be able to order M2M SIM cards and manage them (activate, deactivate, …).

When you have an account on the Proximus API you also need to activate the CloudEngine subscription here.

The downlink endpoint will allow you to send messages to an NB-IoT device.

When a message is sent, the downlink adapter will:

Downlink will only work if a device is known on the radius (if it has an active connection to the network). When the downlink API is invoked with an MSISDN for which no active session is recorded in the radius DB; the application won't send the message. The network will cache downlink packets if a device is in sleep mode; if it can't be delivered it is lost.

An http 200 OK is returned if the message was delivered.

The endpoints for CloudEngine UDP or COAP data were split up based on IP and ports in the same subnet; leaving only a single APN to be used: iot.prx.be.

CloudEngine is a scripting language making it possible to design event flows. These events can be ingested from various sources such as HTTP, MQTT, LoRaWAN, SMS and the processed data rerouted through HTTP, MQTT, SMS, Mail & SMTP, etc.

All necessary information on how to set up basic CloudEngine flows can be found at this place.

An example on how to integrate with NB-IoT can be found in chapter NB-IoT CloudEngine flow.

The messages sent to CloudEngine are triggering a script using following tag structure: 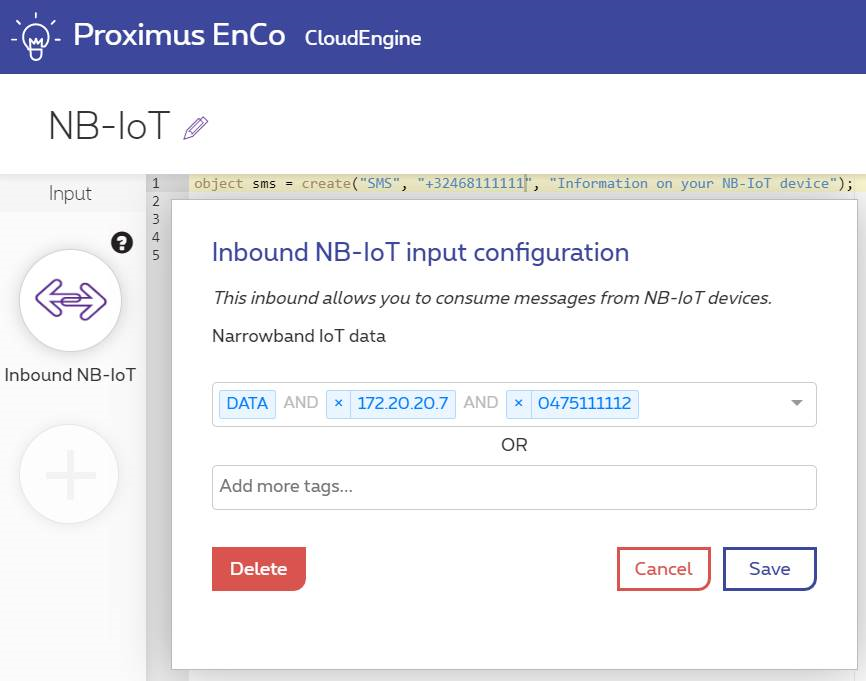 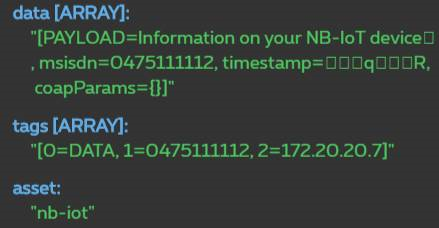 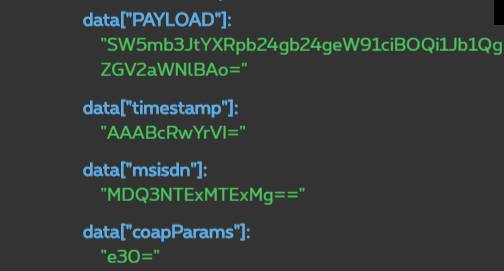 Messages sent by NB-IoT devices can be used to trigger CloudEngine scripts.

Below an example of a device sending messages to CloudEngine triggering a specific script using the corresponding tags.

It could be used for example to forward some information on humidity levels via our SMS API.

More details on the CloudEngine platform can be found in chapter Getting started.

In order to gain access to the resources exposed by your API assets, you will need to pass along a valid OAuth2 bearer access token. Here is how you can generate such a token.

Each project you create through the API Solutions Market will result in the creation of a unique pair of OAuth2 application keys. To retrieve your keys, proceed as follows: 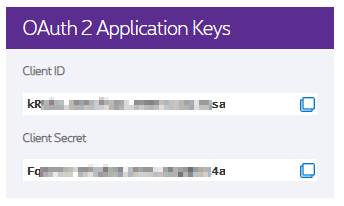 Your application keys are sensitive information; keep them private at all time!

Make sure to store your application keys in a safe way, avoiding them to leak or be stolen by an unintended audience. They are quite sensitive, in that anyone obtaining them will be able to gain access to your assets. In case your application keys would become compromised, contact us through support and we'll revoke them to block access, and provide you with a new pair. This is also the reason why all API traffic should pass through secured HTTP, and why we do not support plain HTTP.

A bearer access token is a self-contained unique identifier through which you can gain access to API resources. Before elaborating on how you can obtain such type of token, please note that these tokens are valid for a limited time span of 1 hour (or less, if explicitly revoked).

You can obtain a new token by issuing the following request against the server https://api.enco.io:

Issue a request to https://api.enco.io/token, adding the following headers and body:

The field access_token in the response contains your token. The field expires_in will show you the remaining validity of your token, in seconds.

Single active access token Within the context of a single application, you will only have a single active access token at any time. If you would request a new token using the above request message while the previously issued token has not yet expired, you will get back the previous token. To obtain a new one, revoke the old token; then generate a new one.

Code Samples To help you getting started on implementing this authentication in your code, you can find some samples on our Github.

This procedure should be used when your token has been compromised (leaked, stolen, etc.), or if you want to generate another token, but your old token is still valid.

Issue a request to https://api.enco.io/revoke, adding the following headers and payload:

Your permanent token is sensitive information; keep it private at all time!

Make sure to store your permanent tokens in a safe way, avoiding them to leak or be stolen by an unintended audience. They are quite sensitive, in that anyone obtaining them will be able to gain access to your assets. In case a permanent token would become compromised or not needed anymore, delete this token from your "TOKEN" dashboard by clicking on the red cross next to it.

All set to call your API!

Stay informed on offers, promotions and platform updates by e-mail. You can unsubscribe at any time.

This site was created and is managed in accordance with Belgian law.